Please write your Congressperson to support this bill. It only take a second to go HERE and send a pre-written email directly to your Representative. 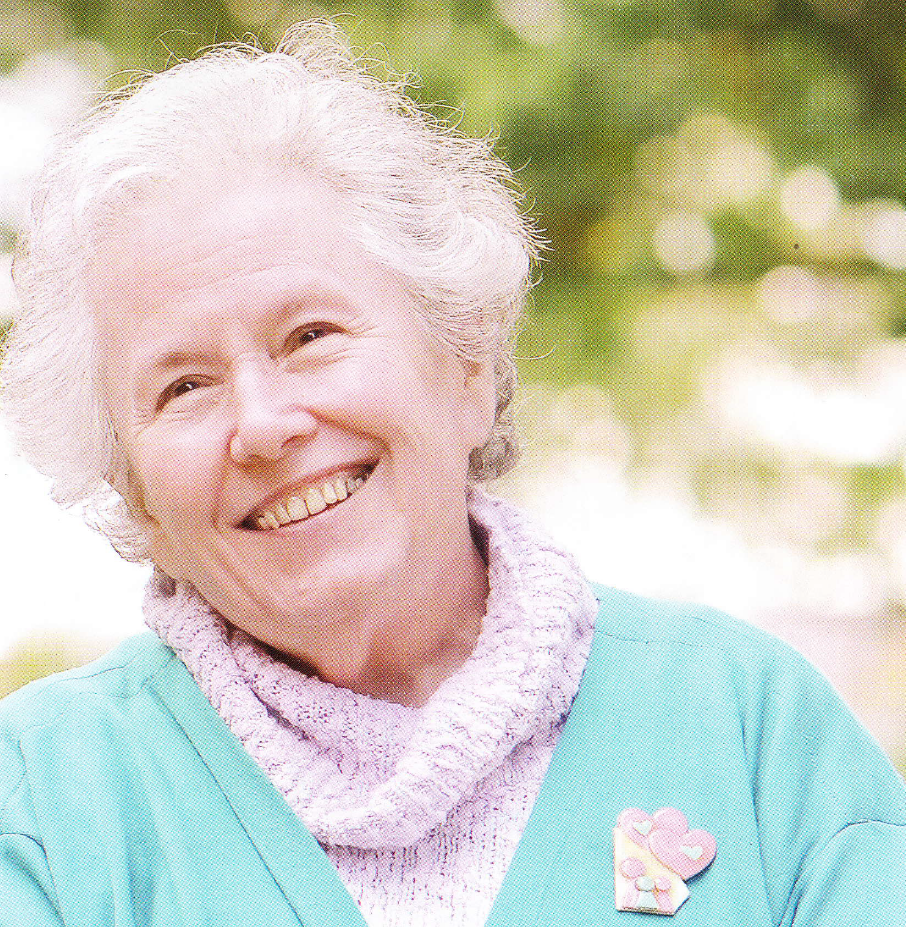 Sheppard Pratt Health System, Emerging from a Traumatic Past

This is a story about a remarkable RPCV, Nancy Flanigan, who served in the 1960s. She was repeatedly raped, became pregnant and the infant died. She received no help for decades. She is finally coming forward with her story and healing. But thus far no help is forthcoming from either the PC or the US Department of Labor. 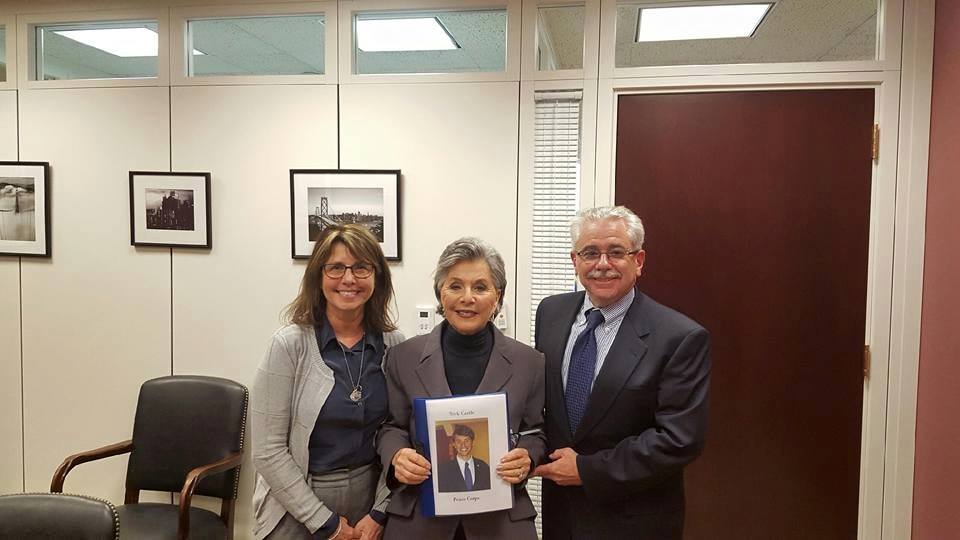 Sue Castle does a storyslam about the death of her son, Nick.

RPCV Alan Toth interviews RPCVs and posts a series of 4 podcasts discussing issues involving reform. Listen to all of the podcasts HERE.

Episode 4 download Institution: This story investigates a fundamental flaw in Peace Corps policy which prevents the agency from embracing reform.

Extra: Full interview with RPCV Chuck Ludlum. Chuck Ludlam and Paula Hirschoff served as Peace Corps volunteers in the Sixties, and they served again as volunteers in Senegal from 2005 to 2007. They found that Peace Corps had not matured as much as it should have over the years. They are among the very few volunteers who have successfully advocated for Peace Corps reform.

Senator Poe presents the medical negligence of the case of Nick Castle on the floor of congress.

Letter from Dr. Remington Nevin to PC Director Carrie Hessler-Radelet requesting reform on the use of the malarial prophylaxis, mefloquine/Lariam. His letter was never answered by the PC.

Carrie Hessler-Radelet (Director Peace Corps), Nancy Tongue (Health Justice for Peace Corps Volunteers) and Chris Lu, (Deputy Secretary of Labor) met together with the US Department of Labor in DC. Health Justice presented a proposal for reform to Labor. 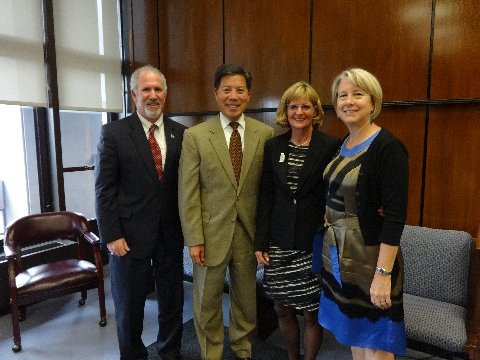 Above: Nancy Tongue and Patrick McClannahan (RPCVs) met with Congressional staffers on Capitol Hill (left) and with the NPCA staff (right). 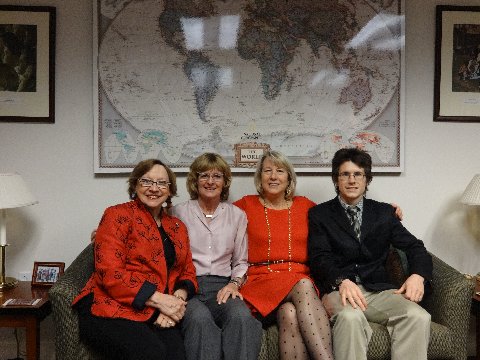 Following up on Carrie’s behalf, I’m happy to update you on how things are progressing. Carrie is diligently preparing for her confirmation hearing, and we are hopeful it will be scheduled soon. As you probably remember from the fact sheet we shared a few months back, we have taken several steps in the last few years to improve health services and support for both current and returned volunteers, and we continue to build on these steps. Below are some of the ways we are doing that.

We greatly appreciate your commitment to ensuring current and returned Peace Corps volunteers receive the highest standard of care, and I assure you that we share that commitment. The health, safety and security of our volunteers are our highest priorities.

We can best serve those looking for assistance by hearing from them directly and addressing their case individually, one-on-one.

Once Carrie’s confirmation process wraps up, we look forward to talking further about our efforts and our progress. Thank you for your continued support!

Last week, the U.S. Food and Drug Administration updated its warning label on the anti-malarial drug mefloquine hydrochloride, and there has been a surge in news coverage lately about the side effects of medications used to prevent malaria.

The Peace Corps takes these warnings very seriously and has taken proactive steps to ensure that Volunteers have all of the information they need to make an informed decision about the anti-malaria medication that is right for them, in collaboration with their Peace Corps Medical Officer.

Before beginning any kind of anti-malaria regimen, every Volunteer has an individual, one-on-one consultation with their Medical Officer to discuss the pros and cons of each medication and all possible risks and side effects. Volunteers can revisit their choice of medication at any time during their service, and while mefloquine continues to be an FDA-approved medication for malaria prevention, Volunteers who wish to request a change in medication can do so simply by talking with their Peace Corps Medical Officer. This policy is in place at every Peace Corps post worldwide, and the Peace Corps is working hard to make sure each and every Volunteer is familiar with the options available to them.

The Peace Corps uses a multi-pronged approach to combat malaria among Volunteers, which includes training on prevention, provision of insecticide-treated bed nets, screening for windows in all Volunteers’ homes, and a choice of one of four types of medication, each of which has proven extremely effective in suppressing malaria. With the proper use of bed nets, protective clothing, insect repellents and anti-malarial medication, the chances of developing active malaria are significantly reduced.

Links to assorted articles, documents, presentations, etc. created by HJPCV in conjunction with Peace Corps in order to improve healthcare:

We conducted a health survey in 2013 with the help of NPCA's access to members. And we received about 7,500 results! Thank you all for your time and input into this important endeavor. It helped inform us about issues that need to be addressed and we were able to share this with the Peace Corps.

Read the analysis written by one of our co-founders.

Every year thousands of Americans leave the country to begin service with the Peace Corps. Hundreds of Peace Corps Volunteers will return every year because of health conditions that could not be treated in the host country. Returned Peace Corps Volunteers with lasting health conditions face challenges in obtaining service related benefits that have not previously been studied. In the last several years, Peace Corps’ treatment of Volunteers’ health and safety concerns in their country of service has come to public attention with several highly publicized examples, yet no research has been undertaken to better explain these issues.

San Francisco Gate Forum: Aug 1, 2014
Response to Trail of Medical Missteps in a Peace Corps Death
Comments by Sue Castle, mother of deceased PCV, and others

Mother Jones: December 13, 2012
Joining the Peace Corps? Don't Get Sick, Whatever You Do
Several RPCVs discuss their struggle to get health care

Letter to Senator Judd Gregg: August 30, 2007
Letter outlining a request for a Government Accountability Office (GAO) study and dedicated ombudsman/advocate for volunteers
In 2007, a formal group of us wrote to US Senators asking for help but we received little response. This is a letter we sent to Senator Judd Gregg